Sarah Gerhing, Adoption Therapist and Post Adoption Supervisor, has been with The Villages for 7 years and has worked with countless children and youth.  Everyone Sarah has worked with has a special place in her heart, but there was one youth who made a lasting impression.

Teon’s story is tragic.  When he was 5 years old he was placed in foster care.  He was adopted, but sadly Teon’s adoptive mother passed away and he found himself back in foster care.

When Sarah met him he was preparing to leave the foster care system and live on his own.  Sarah’s job as an adoption therapist was to teach him life skills that would prepare him for independent living. 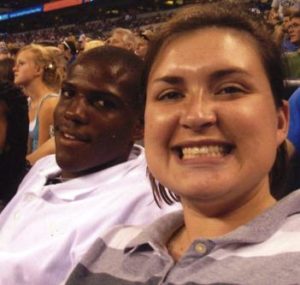 While Teon worked with Sarah he obtained his GED and got his driver’s license.  The two worked to identify Teon’s life goals, and created a plan that would help him achieve those goals.

Teon wants to be a police officer.  He applied and was accepted into the Army so he could receive training and experience that he can use later.

“He’s a kid who has worked so hard,” said Sarah.  She is so proud of what he has accomplished considering the hardships he has faced.  She keeps in touch with him on a regular basis.

“I know you aren’t my mom, but I wanted to wish you a Happy Mother’s Day because you’ve been like a mom to me.”

Sarah was so touched by his thoughtfulness.  “He made me cry,” she said.  “He’s such a sweetheart.”

A “mother” takes on many different forms, even that of an adoption therapist.  At The Villages, we believe a mother can be any special woman in a child’s life.  For Teon, it’s Sarah, the one who helped him overcome a painful childhood and worked with him to become a successful adult.  She has been the woman who has loved him like a mother would love a child.

Help us create more stories like Teon and Sarah’s.  Our upcoming fundraiser, CHAIRish the Children, is one of our most unique events of the year.  It is being held this year at the Lucas Estate Sports Pavilion and we would love to see you there.  Tickets are on sale now and the online auction starts on November 1st.

Shaping children’s future and legacy through love and guidance is the purpose of The Villages.  Sarah and Teon’s story is why we do what we do and we appreciate your support to help us continue to make a difference in the life of a child.