Making a Difference: How a Local Company Collected over 10,000 Diapers for The Villages 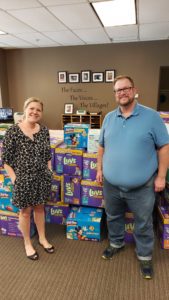 Abbi Achterberg, Director of Community Engagement for The Villages, receives SmarterHQ’s donation of 10,000 diapers from Bob Richards, Lead IT Engineer.

Our annual Diaper Day, on Wednesday, August 21st,  is a great opportunity for company employees to rally around a great cause. Earlier this year, one of our partners, SmarterHQ Indianapolis, collected diapers to donate to The Villages. This effort resulted in employees donating over 10,000 diapers for the infants and toddlers we serve.

Bob Richards, SmarterHQ’s Lead IT Engineer and an adoptive parent, says once he learned about the need for diaper donations at The Villages, he knew it was an effort SmarterHQ employees would support.

Abbi Achterberg, Director of Community Engagement for The Villages, said working with SmarterHQ was a joy from the start.

“I could tell Bob was passionate about what we do and his personal story was a great tie to our mission. We were so overwhelmed and thankful when we found out what their employees accomplished. No other company has come close to collecting as many diapers as SmarterHQ”, said Achterberg.

Richards explains how SmarterHQ started its company-wide diaper campaign for The Villages:

What led to your decision to donate to The Villages? I am on the ServeSmarter committee here at SmarterHQ, and the members of the committee take turns heading up a passion project.  My son was born into foster care, and we adopted him 16 months later.  So, what The Villages does has had a huge impact on our lives.

How did you get employees excited about your donation effort? We had a contest to see who could donate the most diapers.  The one thing about an effort like this is everyone wants to help kids, especially babies!  Most employees here have families, so everyone rallied behind it.  Not to mention, we created The Wall of Diapers in our lobby, and everyone got excited to make it grow.

What has been your most rewarding experience as a partner with The Villages? Two things: First, it was awesome to see our entire company go all in for a cause, especially one that required employees to spend their own money. Second, and equally important, was the appreciation we felt from The Villages for our efforts.  I really felt like it was going to make a difference.  We set a goal for 8,000 diapers and smashed that with over 10,000.

“Hopefully more companies read this and decide they can make an impact too.  You don’t need to be well-known. You just have to decide to make a difference,” Richards says.