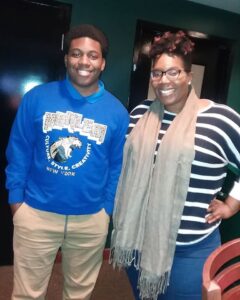 September is Kinship Care Month. The Villages Family Connection Network Kinship Care Program strives to empower kinship families to help them achieve a stable, positive family experience that will best allow children to reach their full potential. We are proud to honor and support these heroic caregivers – grandparents, siblings, and relatives who are raising a family members child(ren).. Learn about one of our kinship families – Sharvonne and her younger brother Joseph.

When Sharvonne talks about her brother Joseph, you instantly feel how proud she is of his accomplishments. Joseph, 17, is working while finishing high school. She says he is becoming more organized and responsible – all the characteristics she wanted for him since he moved in with her at age 11.

“My mission has been to make sure he has a work ethic,” Sharvonne says. “And, he has that. I push him and always tell him to advocate for himself.”

It’s the life Sharvonne was afraid Joseph wouldn’t have if he continued to live with their mom in Harlem, New York. After multiple illnesses, it became clear Georgiana, Sharvonne and Joseph’s mom, was unable to manage her health and a young son. Sharvonne, then a graduate student at Indiana University-Purdue University Indianapolis, made the decision to step in as Joseph’s legal guardian and move him to Indianapolis to live with her full-time.

“Joseph and I were walking in the neighborhood during one of my visits and he crossed the street to talk to a drug dealer,” Sharvonne says. “That one incident stayed with me because I knew at the time Joseph was a really active kid and my mom wasn’t going to have the energy to keep up with him. He would have gotten away with a lot.”

With the help of family in New York along with friends and colleagues at IUPUI, Sharvonne was able to complete the lengthy process of guardianship and welcome Joseph to Indianapolis. Immediately, Sharvonne juggled her studies, work and her new role as Joseph’s guardian. She utilized her network to involve him in mentoring groups for boys. She also committed herself to checking in with teachers to ensure Joseph kept up with assignments.

Sharvonne learned about The Villages Kinship Care Program through a friend. She calls the program a lifesaver.

“I felt like I wasn’t alone in this journey. To meet once a month with people going through similar things made a big difference,” Sharvonne says. She now serves on the Indiana Statewide Kinship Care Advisory Committee.

Sharvonne credits The Villages and friends in the Indianapolis community for supporting her and Joseph through the years. He’s now in his senior year of high school with plans to pursue a vocational career when he graduates. Sharvonne talks to her mom every day. Her health has improved, and she visits Indianapolis twice a year.

Sharvonne says the experience of raising her brother while going to graduate school definitely taught her patience. She says it has been wonderful growing up together.

“He likes to say he gets credit for all the things I’ve accomplished,” Sharvonne says with a laugh. “He’s been there for  all the big moments in my life… my first car, getting a house. It was intentional to include him in all those moments because I wanted him to understand the sacrifices and the saving that goes into buying those things to help him grow.”