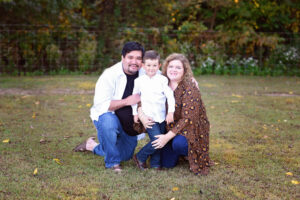 Marko poses with his mom, Heather, and dad, Ron.

It has been a little over a year since Ron and Heather adopted 5-year-old Marko, and the family is already making memories. Heather has a notebook full of funny things Marko says each day, the preschooler’s best friend is Heather’s dad, lovingly known as Papaw, and everyone from classmates to friends at church has a story about Marko’s fun and loving personality.

Adoption was discussed early in Ron and Heather’s relationship. It became a serious option years after the couple married. Heather and Ron learned about The Villages through an online search. The support of Margaret, a case manager at The Villages in Bloomington, was just what the couple needed to navigate their new journey into foster parenting, Heather said. She describes Margaret as “fully engaged and hands-on” through the entire adoption process.

“I cannot say enough about the support from The Villages. It was everything we needed,” Heather says. 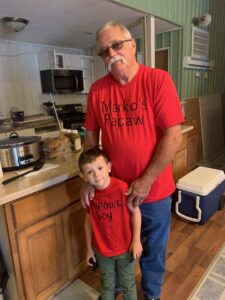 Marko with his best friend, his PaPaw.

Marko was placed in Ron and Heather’s home in 2018. They adopted him in June 2019. Heather said the couple’s love for Marko was instant. “Within the first few days of Marko being in our home, we just knew,” she says. “It felt like finding the lost piece of the puzzle we’ve been looking for. He just fit.”

Marko is thriving with his forever family. He enjoys school and loves spending time with all of his family, including his Papaw and “Tita,” Heather’s sister. Heather says family and The Villages are a big part of the couple’s support system.

“We went through all the training, read the books, watched videos and I truly felt like if I just loved this child, it would be enough, but we still rely on Margaret, our family and church community to help us on this journey. We are so thankful for them,” Heather says.

November is National Adoption Month. The Villages is proud to support Indiana families like Ron and Heather  through the adoption process. Learn more about our adoption services.