The story below is one of the many mentions The Villages and Prevent Child Abuse Indiana are getting in the press during April for National Child Abuse Prevention month. Many thanks to Marisa Kwiatkowski, IndyStar reporter, for covering these impactful initiatives in honor of every child who deserves a happy, safe and carefree childhood and the many volunteers who help us continue our mission of brightening futures every day. 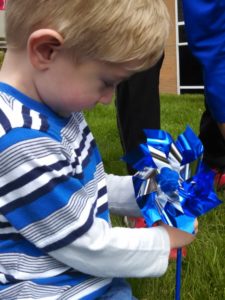 Every spring, thousands of pinwheels spin in front of homes, businesses and government buildings throughout the country.

Each pinwheel symbolizes hope — hope that children will have happy, safe and carefree childhoods.

A dozen volunteers planted 1,000 pinwheels this week in front of The Villages, a nonprofit child and family services agency. They will remain there throughout April, which is National Child Abuse Prevention Month.

“It takes action for a pinwheel to move, just as it takes action to make a happy childhood,” said Sharon Pierce, president and CEO of The Villages.

Last year, the Indiana Department of Child Services received more than 200,000 reports of suspected child abuse or neglect. There often are multiple reports about the same situation.

State records show  29,686 Indiana children had been abused or neglected.

Prevent Child Abuse America estimates effective prevention policies can save taxpayers $80 billion per year. Not having such strategies can result in more money being spent on foster care services, hospitalization, mental health treatment and law enforcement, according to the organization.

What you can do

Pierce said the pinwheels are a visual reminder of the need to invest in Indiana’s children. If every adult paid attention to children in their own purview — such as kids in the neighborhood or kids in their own children’s classrooms or extracurricular activities — Pierce said it would create a safety net that covers the entire state.

“Think about the power that can resonate in our state,” she said.

DCS and The Villages offer a list of ways the public can help:

If you suspect abuse or neglect, call the Indiana Child Abuse and Neglect Hotline at (800) 800-5556.
Reach out to parents you know and offer a hand or emotional support.
Volunteer time to programs that help parents.
Let all the children in your life know they can depend on you.
Advocate for community services to help families.
Become a foster parent.
Call the caregiver resource line at (800) 244-5373.