David, age 8, has gone through more than most people do in a lifetime. After suffering abuse and neglect at the hands of his parents, David found the love and support every child deserves from an amazing Villages’ foster family. The Klines opened their hearts and home for David and fell in love with him immediately! David is just like other kids his age; he loves sports, playing video games and spending time with his family – his amazing foster family! 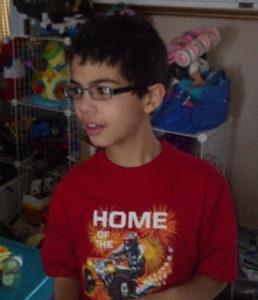 “Events like these are so important to the children we serve,” said Sharon Pierce, The Villages’ President and CEO. “The Villages’ children we serve aren’t bad kids, just kids who have had bad things happen to them. Attending a sporting event like Pack the House with their family helps them feel normal and just like the other kids who are at the game with their families.”

On Saturday, David will drop the puck to kickoff the Pack the House for Charity hockey game. He, his foster siblings and parents will be among the 10,000 people attending the game. David was selected as the ceremonial Puck Dropper among the 1,400 children served by The Villages.

There are thousands of children who are hurt by the people who should love them the most – their parents. The children served by The Villages are receiving the love and support they need to overcome this trauma, but The Villages can’t do it alone. By purchasing tickets to Pack the House, you’ll help fund The Villages’ life-changing programs and services offered to abused and neglected children like David.