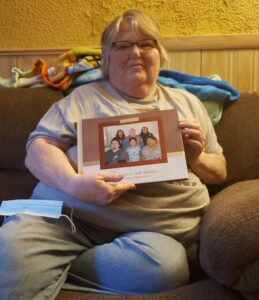 Lora, a retiring foster parent, holds a scrapbook gifted to her by the staff at The Villages in Terre Haute.

Lora remembers the many times she told her friends she never wanted to have children. Twenty years later, she has cared for over 40 children in foster care and adopted five.

“I wouldn’t have it any other way. It has been a gift,” Lora says.

Now, the Terre Haute mom is closing this rewarding chapter of her life as a foster parent with The Villages. She announced her retirement earlier this year, so she could devote all of her time to raising her three young daughters – two are 17 and one is 11. Lora also has a daughter in college and a son who lives on his own.

Becoming a foster parent happened by chance for Lora. She and her husband, John, now deceased, started the process to become foster parents when they learned a friend lost custody of her two children. They immediately stepped in to help. That decision grew into caring for even more children in foster care. The couple became foster parents dedicated to working with children affected by trauma.

“These kids come into your life and their past has been so tragic,” Lora says. “As a foster parent, I couldn’t offer them a ton of things like a vacation or anything fancy, but I always offered security, comfort, and family. I treated them as my own. That’s what they want most of all – to be part of a family.”

Lora and John were foster parents for several agencies in Terre Haute and joined The Villages in 2010. When John died, Lora continued to foster parent and adopt children. The woman who never wanted children now has a house filled with laughter and activity. She and her daughters also rescue cats and dogs. They currently have seven cats and one dog.

In addition to foster parenting, Lora has also provided support to other foster parents at The Villages by sharing her experiences and offering advice during the process.

Kathy Stagg, clinical director at The Villages-Terre Haute, said Lora is a great example for all foster parents, particularly for those who care for teen girls who have experienced trauma.

“She demonstrated the importance of picking battles and the use of humor in difficult times. She was encouraging yet honest about the joys and challenges of fostering, and often said ‘it’s the hardest job you will ever do that you love.'”

Lora says she treasures staying connected with youth who once stayed in her home. Most of the children she’s cared for over the years are now adults with their own families. They often call to ask for advice, reminisce, or check-in on special occasions, including Father’s Day to acknowledge the impact John had on their lives.

“Those are things that warm your heart. They never forget how you treated them with so much love,” Lora says.

If you are interested in foster parenting at The Villages, Information Sessions are a great way to start. These virtual meetings are hosted by our team, across the state. Find local dates and times here.