Ann King has been creating chairs for CHAIRish since 2008 and this year she is donating “A Little Extra Love” for our fundraiser.  She is a resident of Zionsville and has chosen a koala to be featured on this stool to represent the time she spent living in Australia.  She shared with us that she was inspired by a poem written by her daughter.  Her creative philosophy reads:
“I try to represent the positive and negative pull in everything I create.  One of my writings states: ‘To dwell on what happened in the past or on what might have been — brings bitterness and despair.  Dwell on what might be — for hope and purpose.’  I let the viewer choose which he or she sees highlighted in the work.” 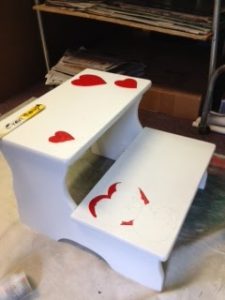 Ann has been involved with helping abused and neglected children in a variety of ways since
1981. She understands that there are many causes to care about in Central Indiana but feels that  many of the problems have been caused by the person needing help.  Children have not caused themselves to be abused or neglected and it is our job to step in and offer our assistance the best way that we can.

Ann’s has studied at the Indianapolis Art Center with Paul Sweany, Jean Vietor and Sandy Ezell, among many others.  She has also participated in workshops with national artists such as Judi Wagner and Joan Rothmeral, as well as local artists, such as Rob O’Dell and Henry Bell.  Her artwork has been accepted in the National Abstract Show, Midwest Exhibit, and Indianapolis Art Center, among others places.  She has received several Honorable Mentions and Best of Show in Metalsmithing.

Tell us what you think of Ann’s stool.  Isn’t it adorable?  Do you know someone who would love to see that in their home?